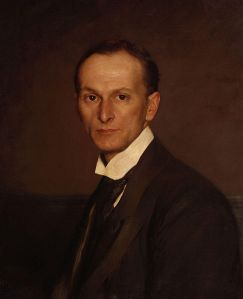 In May 1884 the art critic Marion Harry Spielmann wrote in defence of the often criticised profession of art criticism: ‘The critic – (I am not now referring to the mere notice writer of daily journalism) – spends his life in devotion not only to art but to artists: and, so far as public recognition is concerned, he reaps his reward in sneers and ‘chaff’: sneers from painters, thoughtless and irresponsible, like Mr Whistler; indifference from others less splenetic and querulous.’ Spielmann, a prolific author, editor and arts administrator, was an advocate for and close friend of numerous contemporary artists. Along with the collectors and curators whom he frequently worked with and wrote about, he was an active and influential participant in contemporary art practice in late-Victorian London.

Relationships between artists, collectors, critics and curators are often considered in isolation but rarely in tandem. Drawing upon a diverse range of case studies, covering a variety of local and global contexts, this one day post-graduate workshop aims to unpick consistencies, changes and crossovers in the sometimes fraught but often productive relationships between artists, collectors, critics and curators in the long nineteenth century. By bringing together students, early-career researchers and established academics, we hope the workshop will provide an informal but stimulating forum for conversation, debate and interdisciplinary exchange about the nineteenth-century art world and its constituents.

We invite proposals for twenty-minute papers from postgraduate students, early career researchers and established academics. Papers might explore, but are not limited to, the following topics:

This event is generously supported by the Centre for Modern Studies, University of York

For more information about the centre see: http://www.york.ac.uk/modernstudies/

This entry was posted in Events and tagged collectors, critics, curators. Bookmark the permalink.