The Architect of Wimbledon 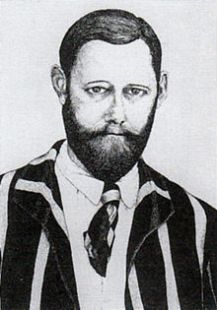 Now the dust behind the bass line has settled, it is worth reminding ourselves of the connections between Edwardian culture and the first ever men’s singles (or ‘gentleman’s singles’, as it was then known) championship held at Wimbledon in 1877.

The two competitors on this occasion were Spencer Gore (1850-1906) and William Cecil Marshall (1849-1921). Gore, like a certain Mr. Murray, triumphed in three sets, in front of a crowd of two hundred, who had paid a shilling to watch. As the winner, Gore was granted a pass through to the final of the following year’s final, which he subsequently lost. He never played the tournament again. Marshall reached the third round in 1879, but got no further than the first round in 1880. From hereon in, both men concentrated on business: Gore as a surveyor and Marshall as an architect.

Marshall enjoyed a long, and relatively fruitful career, with many of his better-known works being produced during the Edwardian era. They include 28 Bedford Square, London; 62 Berners Street, London; and Leigh Heights, Hindhead (formely known as Tweenways). He was also the architect of the Physical Laboratory, (completed 1906) and the School of Botany (completed 1907) at Trinity College, Dublin. His main claim to fame, however, comes from his having been the father of the writer and diarist Frances Partridge (1900-2004), who was associated with the Bloomsbury Group.

Spencer Gore’s last child, Spencer Frederick Gore (1878-1914) was equally well-known in Edwardian art circles, not least for his involvement with the Camden Town Group. Though the young Gore would die of penumonia in early 1914 (outliving his father by only eight years) he had already established himself as one of the most talented painters of the day, striking up an influential friendship with the artist Walter Sickert. Gore was also, reportedly, a pretty talented sportsman himself.

One response to “The Architect of Wimbledon”