Review: Representing Homes from the Victorians to the Moderns 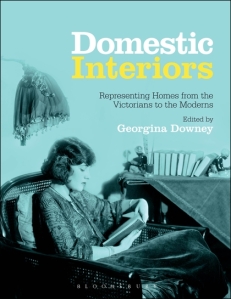 “Interiors” are the very things which all the younger men are industriously striving to paint. Restful ladies in dim or sunny rooms, in the midst of their own pretty furniture, and sometimes raptly nursing their own pretty babies – these, nowadays, are the ends of every young painter’s desire. Alas for the vanity of the endeavour!’ (Max Beerbohm, The Saturday Review, 18th April 1903)

As this comment suggests, the domestic interior was something of an obsession among Edwardian artists. Around the turn of the century, the bi-annual exhibitions of the New English Art Club were overwhelmed by a flood of paintings depicting (in the words of one disgruntled critic) ‘dingy London rooms with plain walls, highly polished furniture, a green door or dado, one figure or more, and frequently a green-shaded lamp’.[1] There were several key inspirations behind this cult, ranging from contemporary Scandinavian drama and the popularity of seventeenth-century Dutch art, to the ever-pressing desire of the artistic community to make their mark on interior design. That this ambition fell under the purview of the painter was never in doubt; not for a generation who had grown up with the names of Rossetti and Whistler ringing in their ears. In the early 1900s, the domestic interior was a battlefield containing several armies of competing tastes; a subject on which almost everyone had an opinion or a preference. It was much more than a matter of dados or lamps: the interior was the space in which identities were made.

The importance of the domestic interior in the history of Edwardian culture cannot be under-estimated – and it comes as no surprise that our period is integral to the ever-growing body of research on this subject. I am tempted to construct some sort clever analogy here in which I compare the Edwardian period to a mildly austere anteroom connecting a cluttered Victorian parlour to an airy modernist lounge. In lieu of this, let me simply say that the turn of the century was a period in which conceptions of domestic space were shifting in all sorts of significant ways.

Domestic Interiors: Representing Homes from the Victorians to the Moderns, edited by Georgina Downey, is one of the more recent attempts to tackle the history of domestic space in the period 1880-1940. Building on work by such writers as Penny Sparke and Charles Rice, it consists of nine essays by leading practitioners in the field, including Francesca Berry, Trevor Keeble and Mark Taylor. Contributors, as you might expect, come from a range of disciplines, although the emphasis tends to be on artistic rather than literary representations of domestic space. Though the volume is heavily indebted to certain theorists (Bachelard, for example), such debates are neatly integrated into what are, essentially, a series of loosely connected case studies.

In a lucid introduction, Downey explains that the aim of the book is ‘to probe, on a room-by-room basis, the relations between interior and image in the early modern home so that the relationship between rooms in terms of occupation and culture are explained clearly and legibly’. The book takes the form of a tour, covering nine distinct spaces: veranda, hallway, drawing room, dining room, studio, kitchen, bathroom and bedroom, finishing up in the attic and the cellar. This proves a neat and pleasurable structure, if a little disconcerting. The rooms through which the reader is moving, after all, are never part of the same structure, ranging wildly in time, place and social status. The veranda of Brenda Martin’s opening chapter, for instance, is in Singapore, whilst the ‘Edwardian’ dining rooms of John Turpin’s chapter are in the United States. In the middle of the book, meanwhile, we find ourselves in on the Continent, watching Pierre Bonnard’s wife in the bath, or basking in the glow of Henri Matisse’s bright red studio. Jumping from country to country forces us to be aware of national inflections, reminding us (in the words of Trevor Keeble, whose essay explores the distinctly British hallway) ‘how deeply embedded social and cultural ideas of family, privacy and identity have been in the fabric and form of the built environment’. Given the length of the book, however (it comes in just under two hundred pages) it can be difficult to keep track of the national or social nuances. To put it another way, in a book about space, it is not always clear where we are standing at any one moment.

Perhaps this is the point. The best writing on interiors is often destabilizing, aiming as it does to disrupt our deeply-rooted sense of how certain spaces operate. All of these essays succeed in making their chosen spaces strange; in drawing out some aspect of the bedroom or the kitchen that a reader may not have considered before. And although most of the readings are tied to specific case studies, there are enough universal strands (and, in the case of the Belgian painter Alfred Stevens, reoccurring characters) to ensure that the book does not lose coherence. To fall back on the inevitable metaphor: the structure of the book is perfectly sound, though the reader can probably expect to lose their way once or twice while navigating between one space or another. This is usually the way, however, with multi-authored collections.

It is as an entertaining introduction to contemporary spatial theories, and the history of the modern domestic interior, that this book deserves to be categorised. Having led undergraduates through some of the more difficult theoretical approaches to the interior written in recent years, it is particularly pleasing to see a book containing such clear writing. The essays are consistently stimulating, and often meticulously researched. The bibliographies (contained at the end of each chapter rather than the end of the book) are especially useful, particularly in a field such as this one, in which new research is appearing constantly.

The distinct contribution made by Edwardian artists in reshaping or representing the domestic interior clearly requires further investigation; if this collection is anything to go by, we won’t have to wait long for such studies to appear. “Interiors”, it seems, are the very things which contemporary academics are industriously striving to explore – and with good cause.