CFP: Modernity and the Shock of the Ancient 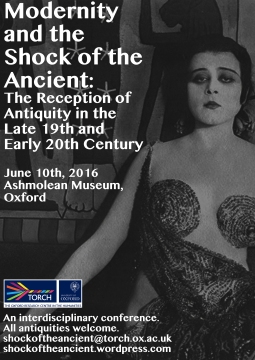 Modernity and the Shock of the Ancient:
The Reception of Antiquity in the Late 19th and Early 20th Century
June 10th, 2016, Ashmolean Museum, Oxford.

Two personalities fought for possession of his soul, and he could not always keep back the lower of the two. They interpenetrated…something very, very old projected upon a modern screen.    (Algernon Blackwood,  The Wave: An Egyptian Aftermath, 1916)

The ancient world was vital to what it meant to be ‘modern’ at the turn of the last century. Yet antique reception in this period is vastly understudied in all areas except that of classical Greece and Rome. At a time when the looting or wholesale destruction of non Graeco­-Roman ancient sites is creating new public interest in their importance to modern cultures around the world, it is crucial that this narrow picture is reconsidered.

We invite abstracts for a one -day interdisciplinary conference at the Ashmolean Museum on June 10th, 2016.  This conference will re-­evaluate the reception of the ancient past in the late 19th and early 20th century, and its relation to constructions of ‘modernity’.  It will explore the reception of a geographically diverse antiquity – from Greece and Rome to Egypt, Mesopotamia and East Asia – in a variety of spheres including literature, public art and architecture, museum exhibitions, cinema, and consumer goods. As a new century began, the ‘ancient’ was signalling the ‘modern’ in both popular and high avant-garde culture, and was harnessed to a range of (often opposing) political agendas. In the process, a ‘new’ antiquity was born, the study of which illuminates what it means to be both ‘modern’ and ‘Western’, today as much as in the early 20t​h century. END_OF_DOCUMENT_TOKEN_TO_BE_REPLACED

Schedule: ‘To show a foreigner England’: Englishness and the Edwardian Landscape

As noted below, registration is now open for our April 11th symposium, ‘To show a foreigner England: Englishness and the Edwardian Landscape’, organised in association with the Royal West of England Academy in Bristol and sponsored by the Paul Mellon Centre. We look forward to seeing you there on what promises to be a fascinating day. The schedule for the day is as follows:

To show a foreigner England: Englishness and the Edwardian Landscape

We are pleased to announce that registration is now open for our April 11th symposium, ‘To show a foreigner England: Englishness and the Edwardian Landscape’, organised in association with the Royal West of England Academy in Bristol. Tickets cost a mere £6.00, and include a light lunch. The day will start at 10.30 and run until  4.30. Speakers include Professor David Matless (author of Landscape and Englishness) and Professor Ysanne Holt (author of British Artists and the Modernist Landscape). There will also be an exhibition tour with the curator, Gwen Yarker.

If one wanted to show a foreigner England, perhaps the wisest course would be to take him to the final section of the Purbeck Hills, and stand him on their summit, a few miles to the east of Corfe. Then system after system of our island would roll together under his feet.

Forster’s comment suggests that the rolling hills of the South West should be taken as a synecdoche for England. Taking a cue from this idea – but expanding the discussion to include other regions also – the symposium will address a range of important questions: where was Englishness located at the turn of the century, and why? What made a landscape especially English, or distinctly not-English? What role did artist’s colonies play in understanding and promoting particular landscapes in the national consciousness? How important was landscape to the development of modern art in England?

If you have any questions, please e-mail us at edwardianculture@hotmail.co.uk