Samuel Shaw is right to remind us of the neglected Edwardian and inter-war landscape painter, Charles John Holmes. As a clever artist occupying panjandrum positions in the art world his work was arguably hidden in plain sight. Rediscovering his pictures is a bit like finding, years from now, that Sir Nicholas Serota had been quietly exhibiting all along in the New English Art Club.

Holmes began to show at the NEAC in 1900 and continued every year thereafter until his death in 1936. In the mid-eighteen-nineties he was ‘discovered’ by Charles Ricketts and Charles Haslewood Shannon, a ‘power couple’ in the art world who published his early essays in the little magazines with which they were associated. Short books followed on Hokusai (1899) and Constable (1902), with a perceptive account of contemporary collecting (1903). Thereafter he slipped into the editor’s office at the nascent Burlington Magazine before assuming directorships of the National Portrait Gallery and the National Gallery. Readers of the Burlington will recall that in an excellent recent article by Jacob Simon, Holmes was also revealed as a controversial retoucher (Vol 161, September 2019, 737-743). Those were the days when manager, writer, connoisseur, conservator and artist could all be rolled into one. It is easy to see why, with such a quiver full, his annual exhibits have suffered from neglect.

As a painter he came to prominence when in 1906, returning from Italy, he sketched The Red Ruin, Lucerne, reputedly from the warmth of a railway carriage when the train came to an unscheduled halt. The snowy landscape (fig 1) which resulted was submitted to the NEAC jury and on handing-in day, it made Philip Wilson Steer shiver.

Holmes, fearing that it might be rejected, caught a cab, rushed home to Ladbroke Grove and copied it onto a new canvas in a hotter palette and brought it back on Monday morning, just in time for the selectors’ deliberations. The copy, really a new version, was admired by Robert Ross, then acquired by the Contemporary Art Society and in 1917 it passed into the Tate Gallery. 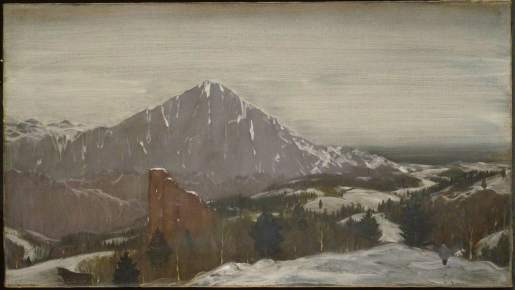 The fact that it was done in a day, with the paint diluted only with turpentine, may account for its apparent dullness, and comparison of the image above with the original version reveals that the Tate picture is simpler, less worked and less detailed. In his autobiography, Holmes recorded that his wife ‘with her customary insight, preferred and claimed the first version’ adding that, with age, it had gained ‘a weight, a substance and a grimness which the replica at Millbank does not possess’ (Self and Partners, (Mostly Self), 1936, p. 250-1). In the last forty years of going to the Tate, I have never seen its version on display, so it is difficult to verify the author’s, or his wife’s opinions. However, I have seen the original. It survived in Holmes’s studio and was sold in an auction in Carlisle a dozen years ago.

Whether or not, as Shaw suggests, Holmes’s impressive industrial scenes, passed into the consciousness of LS Lowry, is an interesting conjecture. There is no doubt that his ‘chimney-scapes’ have a distinguished ancestry in Whistler and the London Impressionists. In their day they found echoes in George Clausen and others, while his austere Cumbrian landscapes, prefigured in the Lucerne canvases, would hang comfortably beside the mountainous West of Ireland ranges of Paul Henry. For these alone he deserves to be better known – and maybe even seen on the walls of Tate Britain.

[Charles Holmes featured in a previous Edwardian Encounter back in 2013. Read it here]