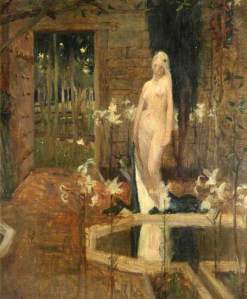 ‘One of the most exquisite of Mrs. Browning’s poems is The Lost Bower; it is endeared to me because it expresses so fully a childish bereavement of my own, for I have lost a garden. I saw this beautiful garden, filled with radiant blossoms, rich with fruits and berries, set with beehives, rabbit hutches, and a dovecote, and enclosed about with hedges; and through it ran a purling brook – a thing I ever longer for in my home garden. All one happy summer afternoon I played in it, and gathered from its beds and borders at will – and I have never seen it since. When I was still a child I used to ask to return to it, but no one seemed to understand; and when I was grown I asked where it was, describing it in every detail, and the only answer was that it was a dream, I had never seen and played in such a garden’ (Mrs Alice Morse Earle, Old-Time Gardens, 1901).