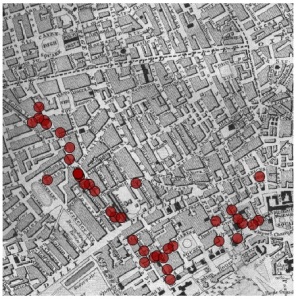 Commercial galleries in London were central to the Edwardian art scene; it was here that many major exhibitions of the age were staged (The Post-Impressionists, The Camden Town Group, The Futurists), and where many modern artists were given their first opportunity to hold solo exhibitions. The period 1895-1914 also saw the foundation of several important spaces, including the Leicester Galleries, the Sackville, and the Carfax Gallery.

The rise of the modern art market in London has gained a good deal of scholarly attention in recent years, with a raft of excellent publications. These are now supported by an online resource, The London Gallery Project, which acts as a research repository and visualization of the history of the commercial art gallery in London, c. 1850-1914. At the heart of the web-page is an inter-active map, which charts the movement of these gallery spaces over time and in relation to other spaces, such as artists’ residences, stores, and museums. An extensive bibliography is also included.

The project is based at Bowdoin College, under the direction of Professor Pamela Fletcher. The research and technological application are an on-going process, and the project welcomes scholarly contributions and feedback.