The exhibition comprises approximately 40 works including paintings, works on paper and archival material and aims to re-examine the significance, influence and continuing importance of Rothenstein’s artistic achievements. The exhibition will examine major themes from Rothenstein’s career including Jewish subjects, portraiture and figure studies (in Paris, London and Gloucestershire) and the First and Second World Wars. These will be contextualised by work on similar themes by a number of mostly younger contemporaries including Barnett Freedman, Mark Gertler, Eric Kennington, Jacob Kramer, Albert Rutherston and Alfred Wolmark, who were all either influenced directly by, or worked alongside, Rothenstein. END_OF_DOCUMENT_TOKEN_TO_BE_REPLACED

From Bradford to Benares: William Rothenstein in Context 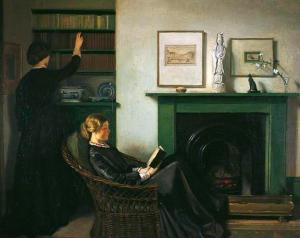 ‘The Browning Readers’ by William Rothenstein, 1900

‘The recent memorial exhibition at the Tate Gallery of works by the late Sir William Rothenstein, held five years after his death, poses a problem that can no longer be avoided. Where exactly does Rothenstein stand in the account of English painting of the first quarter of this century?’ (Home Affairs Survey, August 15th 1950)

On March 14th, The Cartwright Hall Gallery in Bradford will hold a one-day symposium dedicated to the life and work of the artist Sir William Rothenstein (1872-1945), coinciding with the first major exhibition of his work since 1972. The discussion will focus on the question posed above: Where does Rothenstein fit within the narrative/s of late nineteenth and early twentieth century art?

Particular attention will be paid to a series of important cultural encounters that changed the direction of the artist’s life and work. These include: his early training in Paris, turn-of-the-century visits to Spain and Germany, years spent painting in the Jewish East End, his 1910 trip to India, interwar years living in rural Gloucestershire, experiences as a war artist in two World Wars, and his ongoing, sometimes fraught relationship with his home city, Bradford. Although Rothenstein’s life ‘beyond the easel’ will also be discussed (including his roles as critic, collector, patron, gallery-founder and professor), the main aim of the discussion, like the exhibition, will be to put the spotlight on his achievements as a painter, draughtsman and print-maker. END_OF_DOCUMENT_TOKEN_TO_BE_REPLACED

Edwardian scholars may be interested in the following exhibition, opening early next year:

Rose Bonnor was a well-known, accomplished and prolific portrait painter of her day. Between 1894 and 1916 she exhibited thirteen paintings at the Royal Academy, eight at the Walker Gallery Liverpool and one each at the Manchester City Art Gallery and the Royal Institute of Oil Painters.

She had been a prize-winning student at Clapham School of Art, later the Camberwell School of Art, having a portrait first accepted at the Royal Academy in 1894 as a nineteen year old.

Altogether Rose produced at least eighty major portraits, many of well-known public figures. Her portrait of Lord Kenyon, lord-in-waiting to Queen Victoria, Edward VII and George V, attracted particular attention. A highly favourable review in the Evening News in 1916 concluded “…. a notable piece of work by a woman”. Lord Kenyon was one of many prominent people who commissioned a portrait from Rose. This, and the publicity such portraits attracted, established her reputation. END_OF_DOCUMENT_TOKEN_TO_BE_REPLACED