CFP: H.G. Wells and his World on the Eve of the War

When the Lamps Went Out: H. G. Wells and his World on the Eve of the War: H. G. Wells Society Conference, Durham,

This year will see the anniversary of the outbreak of what H. G. Wells optimistically hoped would be ‘The War that Will End War’. When the Lamps Went Out is a conference that seeks to take a snapshot of the literary, political and social landscape at the end of the ‘long nineteenth century’ and the dawn of the First World War. We welcome papers on Wells’s Edwardian and early twentieth-century work, on his political and discussion novels, and/or on his journalistic, political, utopian and wargaming writing, and on the legacies of the nineteenth century in the early twentieth. We also invite papers on connections with the writers and people of significance from Wells’s circle in this period: such figures may include (but need not be confined to): Elizabeth von Arnim, Arnold Bennett, Edward Carpenter, G. K Chesterton, Joseph Conrad, Ford Madox Ford, John Galsworthy, Alfred Harmsworth, Violet Hunt, Vernon Lee, C. F. G Masterman, E. Nesbit, Amber Reeves, Dorothy Richardson, Elizabeth Robins, Robert Ross, Bertrand Russell, George Bernard Shaw, Frederick Soddy, Beatrice and Sidney Webb, Rebecca West… We especially welcome proposals for papers on Wells, gender, sexuality and marriage.

Papers should be no more than 20 minutes long. Please send proposals (maximum of 250 words) by no later than 20th June 2014, or expressions of interest in attending, to s.j.james@durham.ac.uk

This conference also marks the launch of the exhibition Books for Boys: Heroism, Empire and Adventure at the Dawn of the First World War. Books for Boys tells the story of Britain and Germany in the years leading up to the Great War through showing what the public enjoyed reading.The exhibition will also display late-Victorian and Edwardian maps, toys, uniforms, photographs, pictures, medals, literary memorabilia and other artefacts and ephemera. Conference delegates will be invited to a private view of the exhibition on the evening preceding the conference. 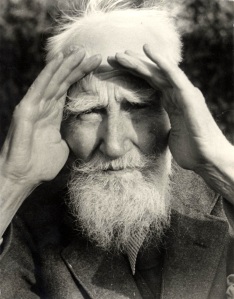 This conference will take place mostly in Ayot St. Lawrence, a small country village just north of London, England where Bernard Shaw and his wife lived for 44 years at “Shaw’s Corner,” but registrants will be bused into London for a day during the week to see important Shavian sites there as well. Accommodations will be available in the towns and villages in the urbanized area around Ayot St. Lawrence. The keynote address will be given by Sir Michael Holroyd. All the details about accommodations, registration, transportation, featured speakers, and the conference schedule is provided here.

For now, we simply want those interested in submitting papers to know what is called for and how to do that. END_OF_DOCUMENT_TOKEN_TO_BE_REPLACED