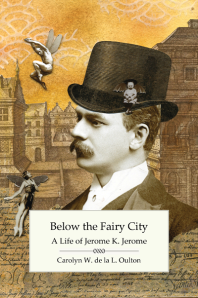 The English writer Jerome K. Jerome is usually remembered for one book: his 1889 novel Three Men in a Boat, which was immensely popular in its day, and continues to spawn countless adaptations and homages. This is no surprise: the book still reads like a handbook for the modern observational comic, with its sharp one-liners about hypochondria, DIY, consumerism and dogs. Despite its meandering, anecdotal tone, the book more than holds its own against competitors, from George Grossmith to P. G. Wodehouse and, later, Nancy Mitford; not least because its perspective is not that of the upper-class twit, or self-important middle-class, but of a proud lower-middle class: a world Jerome K. Jerome knew, and knew better than to patronise. In siding with this class, Jerome risked mockery – Punch referred to him, scathingly, as a ‘cockney pilgrim’, whilst others branded his work ‘vulgar’ – but he also garnered a huge, appreciative audience, becoming a leading figure in what was termed, a little lazily,  ‘The New Humour’. END_OF_DOCUMENT_TOKEN_TO_BE_REPLACED