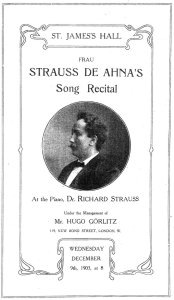 Programme cover for the December 1903 recital

In 1903 one of the world’s leading composers came to London to perform an evening of his own ground-breaking songs.  In today’s parlance this was what could well be called ‘a dream recital’, and yet amazingly it met with a marked detachment from both contemporary critics and the concert-going public as a whole.  Such aloof disinterest, I would say, reveals much about the insular attitudes towards foreign music in Britain at the time.

Richard Strauss (1864-1949) was born in Munich and by the turn of the last century he had become a composer of Lieder and tone poems of international significance.  In 1894 he had married the German soprano, Pauline de Ahna (1863-1950), and together they formed a formidable performing couple, touring extensively across the whole of Europe.  It was the London-based concert manager, Hugo Görlitz, who organised the visit of the Strausses to Britain at the end of 1903, primarily so that Strauss could conduct a Berlioz Centenary Concert at the Queen’s Hall on 11 December that year.  How enterprising it would be, Görlitz no doubt thought, to arrange for Pauline to sing some of her husband’s sensational songs while they were here. END_OF_DOCUMENT_TOKEN_TO_BE_REPLACED